During its annual golf tournament in August, not only did the TD Bank/NMCC event raise nearly $28,000 for scholarships, but a special fundraiser that day is now bringing awareness to the issue of autism.

A legendary Otey Crisman hickory putter is auctioned following the tournament and the high bidder has the opportunity to engrave a nameplate that is permanently affixed to the putter trophy.  This special auction item has raised thousands of dollars for Northern Maine Community College scholarships over the past 13 years.  The high bidder retains the traveling putter for a year then it’s returned for the next golf auction.

Historically, the nameplate is engraved with the high bidder’s name, but this year’s winner, Steve Ouellette, President of Frank Martin and Sons of Fort Kent, requested that the nameplate bring attention to acceptance of people with autism. 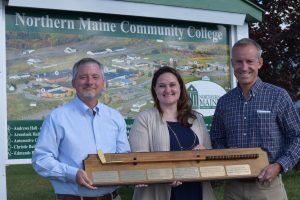 “I have a nephew with autism who lives in Massachusetts.  My sister worked tirelessly to advocate for educational funding and my nephew has made a lot of progress thanks to her efforts,” says Ouellette.  “I’m happy to turn over the putter to an organization that strives to encourage understanding of those with autism and to recognize their abilities.”

“We are honored and humbled that Steve would think of us and support us in our work,” says Maeghan Swanson of the Aroostook Autism Support Group.  “Our group provides assistance and resources to parents and families touched by autism.  For me, it’s a labor of love for my son…but,it’s really a dream that just keeps on developing.  We are very grateful for his unselfish act.”

This is the third time in the putter’s history that Ouellette has been the high bidder.  In the past, he has taken the opportunity to acknowledge the work done by the Hope and Justice Project and to thank first responders in Aroostook.  The most recent auction was particularly significant because the putter will be retired after spending time with the Autism group.  It will then be returned to NMCC next year to be put on permanent display.

The putter, which was used by the great Bobby Jones to win the Masters, was a gift given to the late Peter Hunt.  Hunt then donated the putter for the golf auction.