skip to main content
About NMCC
The Campus
News & Info
Home > About NMCC > News & Info > Campus News > Rob is on a Roll!!

“While we’re not exactly a Down East restaurant, I’m thrilled to stack my recipe alongside the best of the best!” said Ottaviano. “It’s definitely a David and Goliath battle, but being the underdog will only make us work harder!!

Chef Rob Ottaviano makes samples for eager “critics” of his
famous lobster rolls as he prepares to participate in the World’s Best Lobster Roll Competition in Portland on July 8th.
Ottaviano, says the odds are stacked against him but that he will attempt to claw his way to the top! What it all boils down to is great food and a chance for glory! What a tail that would be!

Dozens of lobster roll restaurants and vendors from across the country applied for the competition and 12 semi-finalists were selected, including NMCC.  Ottaviano says he entered the competition on a whim after reading about it in Down East magazine.

“I shared my recipe and explained that it is served on very special occasions at the Community College.  Officials at Down East sampled the roll and later informed me that it had been chosen among the semi-finalists,” Ottaviano explained.  “I was floored as the only finalist from northern Maine and the only college represented.  It’s quite an honor and I hope this event will bring attention to Aroostook, Northern Maine Community College and the wonderful local vendors that supply my ingredients.”

Ottaviano will be competing against the finest seafood restaurants in Maine as well as Los Angeles, Arizona, Utah and New York City.  Each semi-finalist must make 250 lobster rolls for attendees to sample in order to vote for their favorite.  The top three finalists go on to the main stage where expert judges will crown the winner. 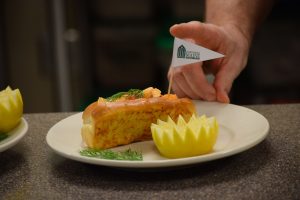 The recipe is perfected with all local ingredients including the butter, bread and a dash of pure maple syrup!

“We think it’s fantastic that Northern Maine Community College could soon be home to the World’s Best Lobster Roll!” said NMCC President Tim Crowley. “We have every faith that Rob has the recipe for success and will be a strong competitor at the festival. NMCC is very fortunate to have a chef of his caliber and creativity…especially when it comes to crustaceans!”

The festival will take place on Saturday, July 8 at Thompsons’s Point in Portland.  The winner will enjoy the title of “World’s Best Lobster Roll 2017,” a trophy and a one-page congratulatory ad in Down East magazine.