In 1977, a gallon of gas cost 63 cents, now it is closer to $2.75. The Dow Jones was under a 1,000, today it is over 24,000, and the first mobile cell phone was still months from being unveiled. Much has changed, but one constant through that time is Betsy Harris, Northern Maine Community College’s longest-serving employee.

Harris spent the past 28 years serving as Registrar, but her story at NMCC goes back a dozen more years when she was hired as a clerk.

“I remember when I began working at Northern Maine Vocational Technical Institute (NMVTI): there were only two new buildings, the Christie Building and Andrews Hall — all of the other buildings were old base buildings,” said Harris.

Since that time, Harris has witnessed the growth of campus with notable building additions such as the John Martin Building, Edmunds Building, and most recently, the Smith Wellness Center. But the most satisfying change to Harris, came in the form of the information technology revolution and a new student information management system. 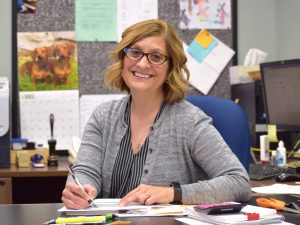 “What a dream come true – it has certainly made my job responsibilities much easier,” said Harris. “The combination of software and data improvements makes it possible to organize and analyze data faster than when I first began.”

Through the years, Harris has also seen changes in staffing as many employees have come and gone.

“I have worked with six Presidents and five Dean of Students and have enjoyed working under the direction of all of them,” she said.

She has worked with current NMCC President Timothy Crowley for many of those years – 15 while he has been president.

“Betsy has made, and continues to make, an important contribution to the day to day operations of the College,” he said. “Her ability to adapt and change as the Maine Community College System has changed over the past 40 years is amazing. Her high standards and ability to meet deadlines have been a trademark of her work and we are fortunate to have her as an employee and a leader at NM.”

Harris says the College is much more than just brick and mortar. It’s the people that make it what it is. She appreciates the support of administration, faculty and staff, but it’s the students who win her heart.

“The greatest highlight is when students thank me for encouraging them to remain in school, when, in fact, they want to quit,” she said. “It is an awesome feeling — knowing that they have reached their goals! The excitement and happiness on their faces, makes for such a proud moment on graduation day.”

Over her 40 years, Harris has also noted some changes in the student population.

“Students’ needs have certainly changed. They are trying to juggle family and job responsibilities, class scheduling, homework, etc.,” said Harris. “It is very challenging. Life today is very different than what it used to be. It is very fast-paced. Students seem to be busier, struggling with everyday hectic schedules.”

Harris knows her time at NMCC will eventually end, but doesn’t want to dwell on the inevitable.

“As you travel down your path through life, one never knows what the future will bring,” said Harris. “Life is short and fragile; so, don’t take it for granted. Find your passion, if you really love what you do, you will find that your life is worth living and you will have true happiness. Also, choose a way of life that helps to make the world a better place.”

Harris also reflected on her colleagues and the many opportunities given to her to grow and learn in her chosen profession, or as she would say, “her passion.”

Dr. William Egeler, NMCC Dean of Students, says Harris has served countless individuals in her role as Registrar at the College.

“Her dedication and commitment to the students, the College and Aroostook County, in addition to her attention to detail, has served all well. We could not have a better person represent us in this capacity.  Personally, I can always rely on Betsy’s knowledge, integrity and loyalty for which I am always thankful and appreciative.”

Each year, Northern Maine Community College recognizes the commitment of its employees through the annual Longevity Awards. In the 2017-2018 academic year, the following individuals were also recognized: