Eivers, who is a nursing student, was selected by the faculty and staff based on her academic success, and campus and community involvement.  During the ceremony, Dr. William Egeler, NMCC Dean of Students, praised Eivers for her contributions to the College.

“Amanda has often made her impact quietly and behind the scenes.  She has taken on leadership roles in the Student Nurses Association, Phi Theta Kappa and in the Student Senate.  She has organized and participated in blood drives, clothing and food drives, fund raisers for the homeless shelter and veterans’ organizations, the Hope and Justice Project and campus open houses.”

Eivers has earned a near-perfect 3.965 GPA and has been a tutor for fellow students and has been working as a CNA for dementia and rehab patients. Upon graduation, Eivers plans to work in critical care while continuing with her nursing education, at least through the Master’s level. 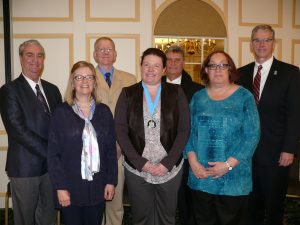 “We’re very proud of Amanda for all these accomplishments and respect her choice to give up a very successful and lucrative career as a software tester (having already graduated from Maine Maritime Academy) in order to come home and pursue the nursing profession,” says NMCC President Tim Crowley.

Each of the seven students received the $1000 John H. Lapoint, Jr. Leadership Award.  Lapoint was a past trustee of the Community College System.  After his death in 1995, his widow served on the Board and helped establish the fund for the annual awards.

Due to this recognition, Eivers will be the Class of 2017 graduation speaker during NMCC’s commencement being held May 13 at 10 a.m., at the Forum in Presque Isle.