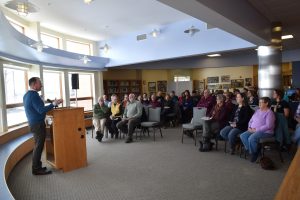 Maine author, Paul Doiron, read an excerpt of his latest book, “Knife Creek” to a full audience on March 5 at the NMCC Edmunds Library.

Doiron is best known for his crime novel series featuring Maine game warden Mike Bowditch. His books have earned several awards including a Barry Award and the Strand Critics Award for Best First Novel for “The Poacher’s Son,” the Maine Literary Award for “Trespasser” and “The Bone Orchard” received a Best of Maine award from Down East Magazine. He has received numerous nominations and additional accolades including an Edgar Award nomination for “The Poacher’s Son.”

“We were delighted to host Paul Doiron as our visiting author at the Edmunds Library at Northern Maine Community College. His reading and book signing was well attended by NMCC students, faculty, staff, and community members,” said Gail Roy, Assistant Dean of Learning Resources at NMCC. “It is not always possible to attract authors to travel so far north to Aroostook County and we appreciate that Paul made this extra effort to connect with his readers in the County.”

Doiron is an avid outdoorsman and his own interests provided experiential research for his books. Being from Maine also allowed him particular insight into the unique characteristics that define the different geographic areas of the state. In his writing, he often adds specific establishments and activities that Maine people can connect with.

“The books have been translated in eleven different languages, so I try to write stories that everyone can relate to, but I always try to place things in my books just for Maine people,” said Doiron. 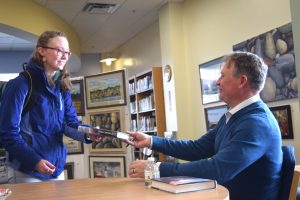 Doiron was very moved by the hospitality of the College community and enjoyed his visit to the County. He even mentioned that Aroostook may provide an interesting setting for a future Bowditch novel.