Following an intense and highly-spirited round of competition, Northern Maine Community College is pleased to announce that Electrical Construction and Maintenance student, Chandler Dobson, has been named the winner of the IDEAL National Championship for the northeastern United States.  Dobson has received a 13-piece IDEAL Tool Kit and travel accommodations, provided by IDEAL, to complete against other territory winners in the National Championship finals at Walt Disney World® in Orlando on November 11-12, 2016.

“I had to convince Chandler that he won – he wouldn’t believe me,” said Todd Maynard, NMCC’s Electrical Construction and Maintenance instructor. “He’s a modest, laid-back guy so he couldn’t believe he was going to Florida to compete. We’re very proud of him.”

The IDEAL National Championship is part of the company’s centennial celebration and was created to showcase the abilities of America’s electrical professionals, students and apprentices. Starting in May and ending in October, electrical professionals and students/apprentices participated as individuals or teams in one of many first-round events held by electrical distributors, trade schools and other organizations across the country. Over $500,000 in cash and prizes will be awarded by IDEAL in the nationwide competition.

“My congratulations to all the winners of this year’s competition, who excelled against some stiff competition for the top slot in their territory,” said Kathy Koziell, Senior Area Sales Manager for IDEAL Tools. “The IDEAL National Championships gives seasoned professionals and students alike the chance to demonstrate their talent and try their hand at essential trade skills. It was an honor to be part of this amazing competition.”

A total of sixty-seven individual professional electricians, and five teams made up of three electricians, sixty-seven individual student/apprentices and five teams of three student/apprentices will be competing in the IDEAL National Championship. There will be two rounds of heavy competition, challenging participants to complete in various electrical tasks. 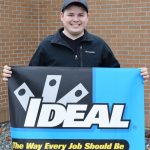