2022 NMCC graduate Alex Sweetser will compete at the national SkillsUSA competition in Atlanta, GA, from June 20th through June 24th. While Sweetser graduated with a degree in diesel hydraulics, he will compete in welding under the guidance of NMCC Instructor Rick Taggett.

Sweetser’s skillset varies from those he’ll be competing against, as his degree is in diesel hydraulics rather than welding; Sweetser took welding courses to supplement his diesel education. “In my 12 years teaching this program, I’ve never had, nor heard of, a student from a different program earning a place at nationals for welding,” NMCC Welding Instructor Rick Taggett said.

“I saw his natural ability when he first enrolled in one of my courses,” said Taggett, explaining that he began working with Sweetser to train for the state competition in February. “I can almost guarantee there won’t be another non-welding major competing at nationals.”

The National Leadership and Skills Conference takes place from June 20th through 24th in Atlanta, where 6,500 students – all of whom won state contests – will demonstrate skills to compete for national titles.

SkillsUSA is a national nonprofit education association serving middle school, high school, and college or postsecondary students preparing for careers in trade, technical and skilled service occupations. The organization serves more than 330,000 students annually across 53 US states and territories. Participants compete in more than 130 job categories.

While Sweetser graduated with his associate’s degree in May, he’s returning to NMCC in the fall to continue studying entrepreneurship. He runs an informal excavating business locally, but would like to better understand how to build and run a successful enterprise. “I like working for myself,” Sweetser explained. Right now he provides excavation services around Aroostook County with his Wacker Neuson excavator, often supporting his family’s business, Myrtle Tree, as an independent contractor.

Even if he places nationally, Sweetser doesn’t plan to pursue his welding licensure. “I have a welder at my house, and use it to fix all of my own stuff,” he said. He’s always enjoyed learning carpentry and mechanical skills around the house and shop, skills passed down from his father, and his father’s father before him. “I just like working on things, really. Puttering around. Some of the things I learned in diesel end up being transferrable to working on my own truck, but also allow me to work on my excavator. Anything that ever breaks or goes wrong, you fix it.”

To learn more about welding or diesel hydraulics programs at NMCC, please visit nmcc.edu or contact admissions at (207) 768-2785. 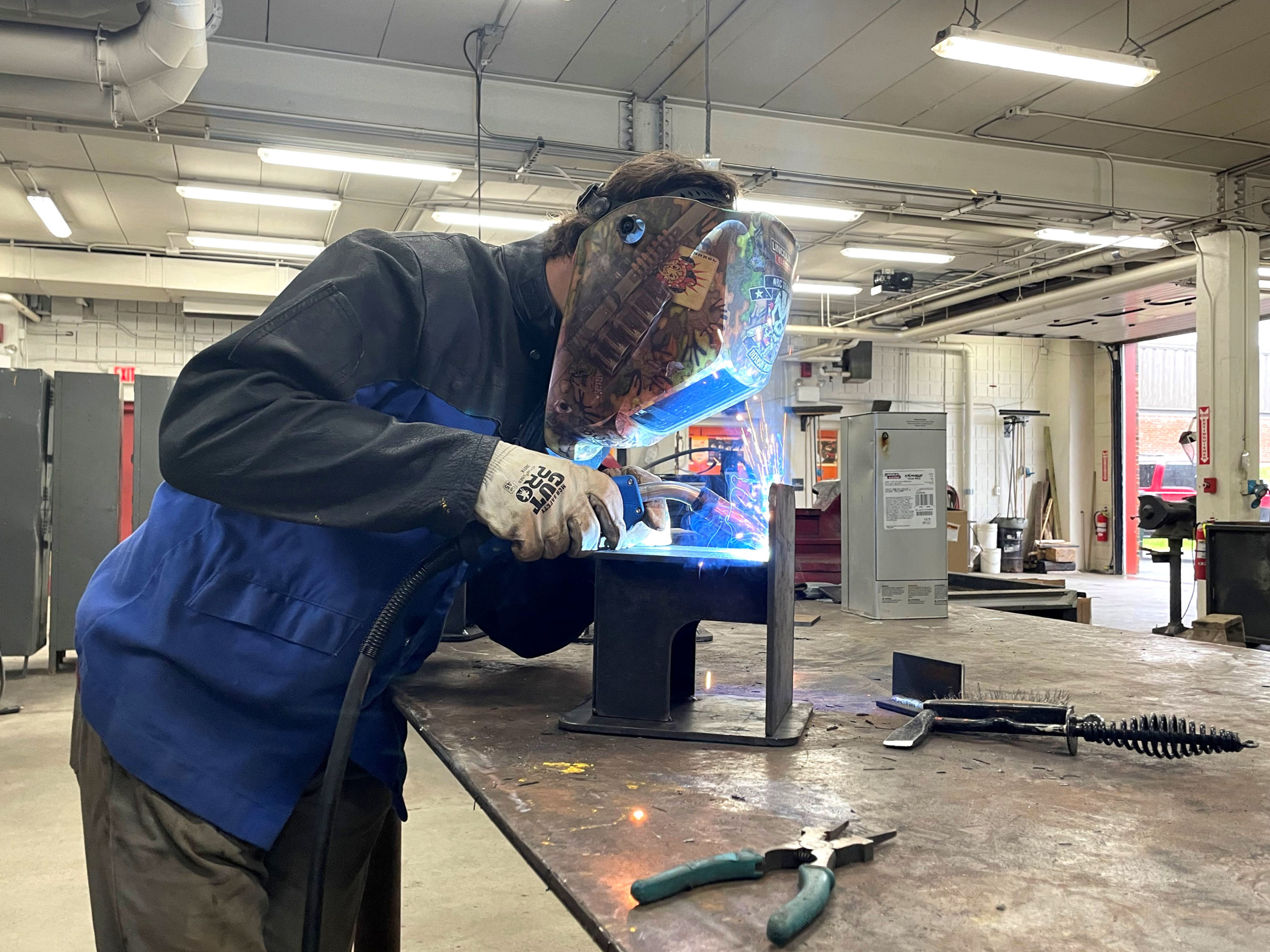 Sweetser spent time this week in the NMCC welding lab preparing for the competition, using blueprints and materials made available to students in advance through SkillsUSA.