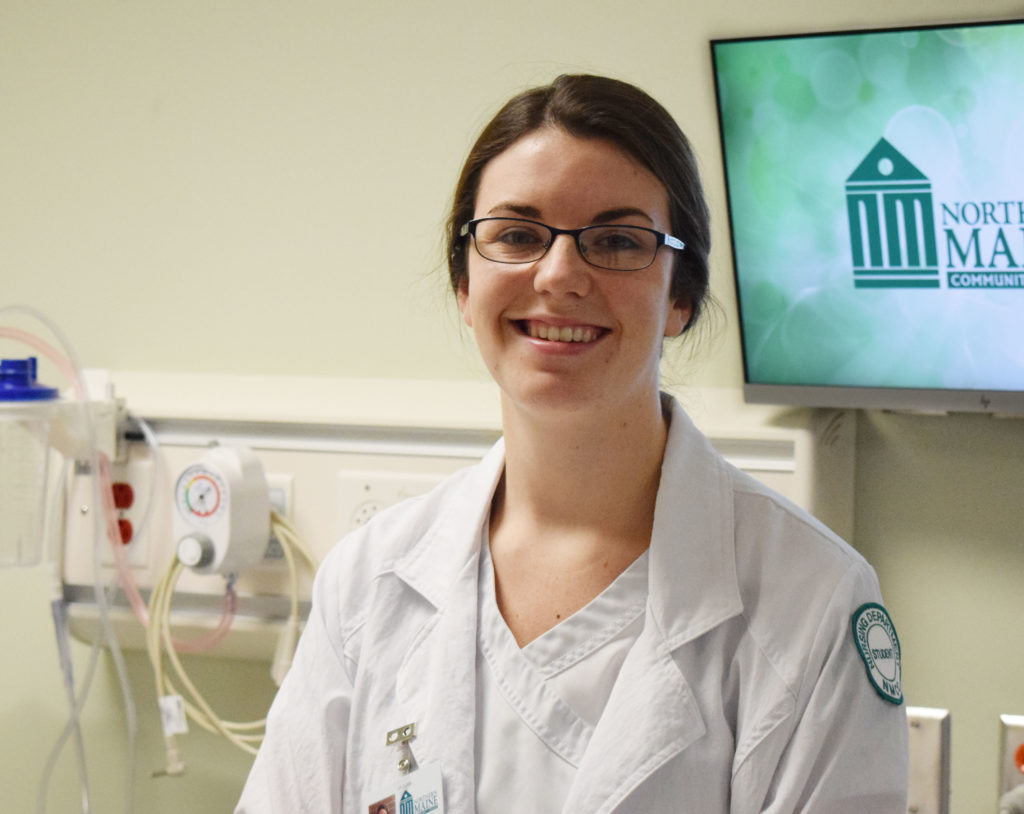 Presque Isle – Ten years ago, on January 18th 2010, 12-year-old Tucker Fletcher received her first cochlear implant at a hospital in Boston. Doctors in Presque Isle couldn’t explain why she’d completely lost her hearing, but diagnosed her with sensory-neural hearing loss. Her two options were to live deaf, or have small electronic devices implanted that would transform sounds into electronic signals for her brain to interpret.

According to Tucker, now 23, at first everyone’s voice sounded like Mickey or Minnie Mouse. In those early years her brain could not correctly interpret the signals, so she needed three hours of speech therapy each week and monthly visits to Boston to adjust the frequencies of her implants, which she describes as tuning a radio.

Having received expert care in Boston and ongoing care and support from her family, Tucker decided to pursue a career as a nurse, wanting to embrace what she considers a compassionate direction for herself. She wanted to help people, and couldn’t think of a better fit.

One of the benefits of Tucker’s hearing impairment is her ability to read lips. She says she can go without this skill if necessary, but relies on lip-reading regularly in places like grocery stores or in a college lecture. Last March, when everyone began wearing masks due to Covid-19, Tucker faced a new challenge in her education. All of her instructors sounded muffled, and she couldn’t understand their lectures.

NMCC Nursing Department Chair Eileen McDougal said, “Tucker can hear, but she has impaired hearing. In a normal year, she would just position herself close to the front of the class. This is not a normal year of course, with face masking. That’s one of the reasons we’ve had to adapt.”

To allow Tucker to continue learning, the NMCC nursing staff worked with the IT department to set up a room in the library equipped with monitors showing a zoomed-in live-stream of the lectures, allowing her to read the instructor’s lips through the clear face masks and also keep the volume as high as necessary. If she couldn’t understand any portions of the lecture she would email the instructor and receive one-on-one help.

As she finishes fall semester and prepares for her final term this spring, Tucker is learning hands-on at Northern Light AR Gould doing her clinical rotations. Not everyone can wear clear masks, certainly not all patients, but she’s finding her way and making it work, a skill she’s been strengthening since early childhood.

After graduation Tucker would like to work in a local hospital and eventually become a traveling nurse, which would allow her to hopefully explore some of America’s skiing destinations. She says Colorado would be fun, “There’s so much to see, and it would be a good challenge for myself to come out of my comfort zone.” She added, “But Maine will always be my home. I won’t leave it forever.”

Regarding working with students with disabilities or impairments, NMCC Department Chair McDougal said, “The nice thing is that Tucker is able to articulate when something is working for her and has suggestions when something is not. She advocates for herself.” She continued, “For anyone with an impairment, if they have a strong interest, I think they should talk with the college and instructors to see what accommodations might be possible.”

For anyone facing impairments or disabilities, Tucker says, “Sometimes hardships in life are a blessing in disguise, but be patient with yourself and take it one day at a time. I also want to add that without the love and support of my family, my significant other, and his daughters, I wouldn’t have made it as far I have.”