Meet Washburn native Kennedy Churchill, a senior in the Business Administration program at Northern Maine Community College. Prior to attending NMCC, Kennedy was accepted at the University of Maine at Augusta where she planned on studying to be a veterinary technician. However, her plans suddenly changed when she decided to stay close to home. “I wasn’t ready to leave my family.” During this time, Kennedy was unsure about what to do after high school and questioned if she wanted to attend college. “My sister encouraged me to attend a 2-year college because I was undecided.” Kennedy’s parents also motivated her to continue her education.

Kennedy chose to study Business Administration because of the variety of job opportunities that are available with a business degree. According to Kennedy, business also runs in the family, as her uncle owns a construction company as well as a miniature golf establishment in Alaska.

Following in her uncle’s footsteps, Kennedy aspires to have her own business. In fact, Kennedy is interested in collaborating with her uncle and opening her own miniature golf attraction in Aroostook County someday. She is also interested in other business ideas, such as operating a cage-free kennel/pet resort. The purpose of the resort would be to eliminate the confinement of animals in a cage and to reduce the anxiety that an animal may endure while being away from their owner. Before pursuing these business ventures, Kennedy would like to obtain employment in the business field to gain more experience. Although she is currently undecided about where she might like to work, she is exploring her options and is open to any available opportunities.

Kennedy is already demonstrating her entrepreneurship skills. Kennedy and her sister started Double K Krafts, a small business selling hand-made infinity scarves, dishcloths and hand towels that they knit and crochet themselves. Their products are sold at community events and on their Facebook page. The sisters also have a pet-sitting business that includes caring for animals when their owners are away.

For Kennedy, gender is irrelevant when choosing a career. “When I chose Business Administration, I didn’t realize that it was male-dominated. I didn’t think about male to female ratio when choosing a program.”

When Kennedy started Business Administration, it appeared to be a male-dominated program; however, Kennedy feels that more females are gaining an interest in business because many of her classes consist mostly of females. In class, Kennedy has noticed that her female peers are more vocal and opinionated than her male peers. She also believes that men and women think differently and that both genders can bring different ideas and individual strengths to the table.

Kennedy reports having a positive experience in the program. “I love it. For being a last minute decision, I am surprised at how well I am doing in the program. It’s the right program for me.”

Kennedy has established connections with her female instructors at NMCC and considers them to be positive role models, especially for women in business. “The instructors I rely on are both female.” Kennedy also reports that her instructors have made her feel comfortable in the program and have increased her self-confidence. “Sharing their own personal experiences in business has made me want to strive to go further in the business field.”

Kennedy plans to transfer to the University of Maine at Presque Isle when she graduates from NMCC next May. Her goal is to earn a Bachelor of Arts in Business Administration with a Management and Leadership concentration as well as a minor in Accounting.

Kennedy is satisfied with her decision to start her post-secondary education at a community college and believes that the education she is receiving at NMCC is comparable to what local 4-year institutions offer. “All of the classes I am taking at NMCC will transfer to UMPI.”

A focused student, Kennedy has earned a 3.9 GPA while attending NMCC. Given her stellar grades, Kennedy was recommended by her instructor to tutor business and accounting students. Kennedy is also the treasurer of the Phi Theta Kappa Honor Society at NMCC.

Kennedy offers tips for college success. “Be motivated and dedicated to your studies.” Kennedy also believes that a person will be successful doing what they enjoy.

Kennedy offers advice for females who may be considering a career in business. “Don’t be intimidated or scared to voice your opinion because you may be the only female in the room. If you want to pursue what you love, don’t think about the gender dominance, do what you love.” 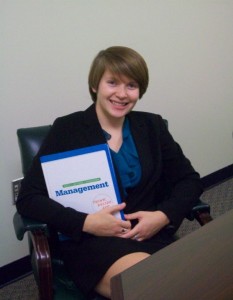