By: Lori Smith, Student Support Career Specialist
When NMCC Automotive Collision Repair (ACR) student Cassandra Lunney started planning for college, she initially considered pursuing a career in the medical field and had an interest in nursing. Cassandra knew she wanted a career that was financially rewarding and believed she needed to attend a 4-year college to make that happen.

Cassandra’s plans changed during her senior year at Presque Isle High School, when she was trying to decide what classes to take. Cassandra’s sister encouraged her to attend the Auto Body Repair program at the Caribou Regional Technology Center (CRTC). “She thought I would like it.” Cassandra’s family owns Blaine Truck Garage, a business that was built by her grandparents several years ago. Cassandra grew up in the shop, where she washed, waxed, and detailed trucks. Cassandra’s father, a truck driver and diesel mechanic, also influenced her decision to pursue a trade.

With support from her guidance counselor, Cassandra was able to join the second year of the Auto Body Repair program at the CRTC. Being a new student in the program, Cassandra had to quickly adjust to the fast-paced environment. Although being a fast learner helped, Cassandra is also thankful for the support she received from her instructor, Ken Westin. Mr. Westin spent time with Cassandra to ensure she completed projects properly. According to Cassandra, he supported females in the trades. “Mr. Westin was very proud to have a girl in his class. He wanted more girls in his program.”

While in high school, Cassandra also participated in Totally Trades, an annual event held at NMCC where females in grades 8-12 have the opportunity to explore trade and technical careers. At the conference, Cassandra participated in workshops as well as a panel discussion, where she spoke with students about her experiences in a non-traditional program.

Given her education at the CRTC, Cassandra decided to pursue Automotive Collision Repair (ACR) at NMCC. After visiting a technical college in Connecticut, Cassandra knew she wanted to earn her education closer to home.  Cassandra feels that the education she is receiving at NMCC is comparable to working in an actual auto body shop. “I am getting more life experiences at NMCC and a sense of what working in the field is like. I am learning more here than just what’s in a textbook.”

She reports that her ACR instructor, Bob Collins, has fostered professional relationships with several shops in the area, which has led to more educational opportunities for the students. One of Cassandra’s most memorable experiences at NMCC was a class trip to Glidden Auto Body in Bangor, where the ACR students had an opportunity to work for two days. Several students received job offers as a result of this experience. While there, Cassandra and her female classmate were interviewed by two of the area television stations, where they advocated for females in the trades.

During a recent visit to Bangor, Cassandra had the opportunity to meet with the manager at Glidden Auto Body. “It was a very optimistic interview. I was offered a job at one of their shops in Brewer.” Cassandra speaks very highly of the staff at the company. “The owner supports women in the trade. His shops have female painters and female managers. He is also fair and treats his customers well.” Cassandra is excited for this wonderful opportunity to demonstrate her skills. Cassandra has many interests in the ACR field. “I would like to be a painter, and do airbrushing and lettering on the side. I am also interested in being an estimator or an adjuster because they make really good money.” She also aspires to someday open her own shop or become a teacher. Obtaining a job that provides financial stability and a pleasant environment are work values that are important to Cassandra.

Cassandra reports that her experience in the ACR program has been positive. “It’s been great. I am not treated differently by my male peers. I am their classmate.” She also speaks highly of her instructor. “Bob is a good teacher. He teaches by the book, but also gives us tips to make tasks easier.”

There are several aspects of the ACR program that Cassandra enjoys. “Airbrushing is one of my favorite classes.” Cassandra likes the feeling she gets when she has completed a project. “I like bringing the piece back to life, back to its original form.” She also enjoys the flexibility of the program and the ability to work on her own projects, as well as detailing cars to raise money for program activities such as the student’s annual trip to Detroit, Michigan.

Cassandra states that the lack of diversity in the field is a challenge for women. “There are not many women in the shop, especially around here. We need to prove ourselves more because we are women.”

Cassandra feels that women work well with customers. “When we are providing an estimate to a customer after they have been in a car accident, we ask them if they are okay. I think this response comes naturally to girls.” In her experience, Cassandra feels that females have a strong attention to detail and take their time when completing a task compared to their male counterparts. Cassandra believes that her strong communication, leadership, and interpersonal skills, skills she says she developed as a member of the Future Farmers of America (FFA), will benefit her in her career.

Cassandra credits her success as a student to having good time management skills and maintaining a healthy balance between school and other responsibilities. “Keep track of your homework and do the best to your abilities. Ask questions if you don’t understand. Spend time with friends or find something away from school to prevent stress.”

Cassandra offers advice for females considering a career in ACR. “Don’t let anyone tell you you can’t do it. If you put your mind to it, you can do it. You will do ten times better if you just have confidence in yourself.” 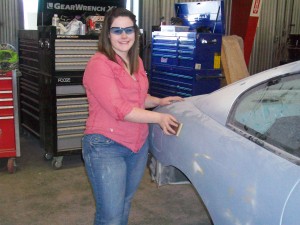