NMCC student and Bangor, Maine native, Rachael Godin, decided to combine her love of art and cars to pursue a career in Automotive Collision Repair (ACR). “I love art. I also like old classic cars, new sports cars, and big trucks.” She had considered a career in art, but was looking for an occupation that would provide better financial stability. Someone gave her an idea. “They suggested I paint cars.”

From the time she was a child, Rachael has enjoyed working with her hands. She has fond memories of helping her father with numerous renovations around the house. “It was so much fun!”

Realizing that she learned best while engaged in hands-on activities, Rachael attended United Technical Center (UTC) in Bangor during her senior year of high school. Initially, she was enrolled in the welding program because the ACR program was full. She quickly realized that her passion was for ACR and was able to join the ACR program with second-year students. Starting a new program with no prior experience did not bother Rachael. “I am a very open-minded person. I was ready to learn.” It was a great experience for her. “I absolutely loved it!” 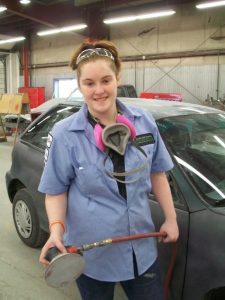 In the program, Rachael painted her first car. She recalls receiving positive feedback from her instructor. “My teacher told me that my taping was neater than the others and that I did a really good job.” Rachael considers Stephen Dyer, her ACR instructor at UTC, as a mentor. “He was an amazing teacher all-around. I may not have pursued ACR as a profession if it was not for him. He is someone I will never forget.”

Rachael chose NMCC because it is the only college in New England that offers a two-year degree in ACR. “Many other schools only offer a certificate program.” Rachael is glad she chose NMCC to study ACR. “I am learning so many things here about ACR that I didn’t know before.”

She enjoys the ample amount of time she is able to spend in the shop working on various projects. “I love the hands-on part of the program.” She also likes tearing down and prepping vehicles. “I like seeing the progress being made. In the end, it’s a work of art.” She also enjoys the customer service aspect of the job. “I like doing a project and seeing that the customer is happy with the work. It is very rewarding.”

Rachael and her classmates recently had the opportunity to tour several auto body shops in southern Maine. When she graduates in May of 2018, she would like to work at one of the shops she toured. “My goal is to work at Moody’s Collision and Auto Body Repair Center in Augusta. I was very impressed with the facility.”

This summer, Rachael worked at David Mathieu Co., Inc. Body Shop in Waterville, where she detailed vehicles and prepped cars for the painter. “I liked working there. It was a great atmosphere with wonderful people. I gained some experience in the field.”

Rachael feels that men and women are equal. “Men are not better than women, and women are not better than men.” She believes that women are capable of doing anything. “A girl can do what a guy can do. With hard work and perseverance, you can do it, especially if it is something you love. If it is hard, push through it. It will get better. Whether you fail or succeed, that is how you learn to improve your skills.”

To be a successful student, it is important not to take on too much. For Rachael, reducing the number of classes she takes each semester has helped, especially since she also works in the College Store on campus. “I would rather take my time with taking classes and do really well, then rush and barely get by. If you take on too much, then you will be overwhelmed.”

Rachael offers advice for women who are considering a career in ACR. “Don’t let anyone discourage you and tell you that you can’t do something. If you put your mind to it and work hard, you can accomplish your goals and what you want to do in your life.”