Meet George Gartley, nursing instructor at Northern Maine Community College. Before George became a nurse, he pursued his interest in animals and the environment and earned a Bachelor’s degree in Wildlife Biology. He began his career working for an environmental consulting firm in California where he participated in environmental assessment impact studies and was the supervisor of plankton studies. After over three years of working for the firm, he moved to Alaska and started working for the National Marine Fisheries, working as a foreign fishery observer helping to enforce the 200-mile fishing limit on foreign fishery fleets. Although he enjoyed the work, George decided it was time to move back home to Presque Isle, Maine.

Upon returning home, George had difficulty finding employment in wildlife biology and worked various jobs in construction and agriculture. During this time, he became good friends with a male nurse at The Aroostook Medical Center (TAMC) and decided to pursue a career in nursing.

George’s upbringing also influenced his decision to be a nurse. “I grew up in a very caring family.” His mother was a nurse and his father, a farmer, was a devout Christian who took great pride in helping others. Both of his parents spent their retirement volunteering at the hospital. According to George, they supported his decision to become a nurse. “They thought it was wonderful.”

When George graduated from the University of Maine with his Bachelor of Science degree in Nursing in the mid-1980’s, there was a severe shortage of nurses; therefore, he was fortunate to obtain employment immediately following graduation. He started on the medical/surgical floor at TAMC. “I fell in love with it. It was like I found my calling. The joy of helping people feel better, being part of the process just felt right.”

George developed an interest in oncology and worked as a Certified Nurse Oncologist at TAMC for eight years. Recognizing a need for dialysis treatment in Aroostook County, he helped create TAMC’s Dialysis Center, a facility that currently serves over fifty patients. Because patients had to travel to Bangor for treatment, this facility allowed patients to receive care locally. George worked at the Dialysis Center for ten years.

After a twenty-five-year career at TAMC, George decided that it was time to enter retirement. He was given the opportunity to teach nursing and became an adjunct instructor at NMCC, a position that later became full-time. He has been a full-time instructor at NMCC for over three years.

George enjoys working with his students. “I try to be a mentor to students and exemplify the characteristics that nurses should have.” He likes when students are given the opportunity to apply what they are learning in class in a real-life setting. “My real passion is doing clinicals in the hospital. This is when a student starts feeling like a nurse.”

Being a student in the Nursing program at NMCC takes a high level of focus and commitment. George suggests accessing the Academic Success Center on campus for help when needed and recommends developing effective time management skills. “For every hour spent in class, spend two hours studying.” He also believes that participating in study groups is highly effective, as well as determining your learning style and finding study skills and learning resources that will compliment that learning style.

George states that an advantage of being a male nurse is the ability to quickly establish rapport with male clients. He states that having a male present in certain situations can be beneficial. A combative patient, for example, may deescalate quicker with a male in the room. A male presence may provide an extra level of protection in an unsafe situation.

George recognizes that men in the profession may face obstacles. “A challenge of being a male nurse is getting female patients to accept you as a nurse.” In fact, he recalls being mistaken for a doctor by some patients when he was working as a nurse. Early in his career, he was relied on to lift and move heavier patients because he was a man. “I was seen as someone with strength, someone who could do the heavy lifting.”

Given the physical requirements that nursing involves, George emphasizes the importance of applying ergonomics to reduce the risk of job-related injuries. Advances in technology in recent years have also helped to prevent injuries, including the use of equipment to lift patients. Nurses also need to be physically fit, not only to do their job, but also to be mentors of good health to their patients. “As a nurse, you need to try to demonstrate a healthy lifestyle.”

George reports having a positive experience while working in a predominately female occupation. “I have always felt very accepted by my colleagues. I get along well with others and have good working relationships.”

He also mentions the many opportunities that nursing can bring, including careers in administration, technology, and education. “Nursing opens so many doors. Career opportunities are great and diverse, with so many directions to go.” George emphasizes the need for nurses in education. “We need nurse educators to create the next generation of nurses.”

George offers advice for males who may be considering a career in nursing. “If your passion is to help people, then nursing is the perfect career for you.” 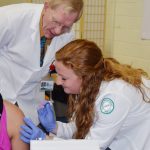 George Gartley, Nursing Instructor at NMCC, assists a student with giving a flu shot to a patient.