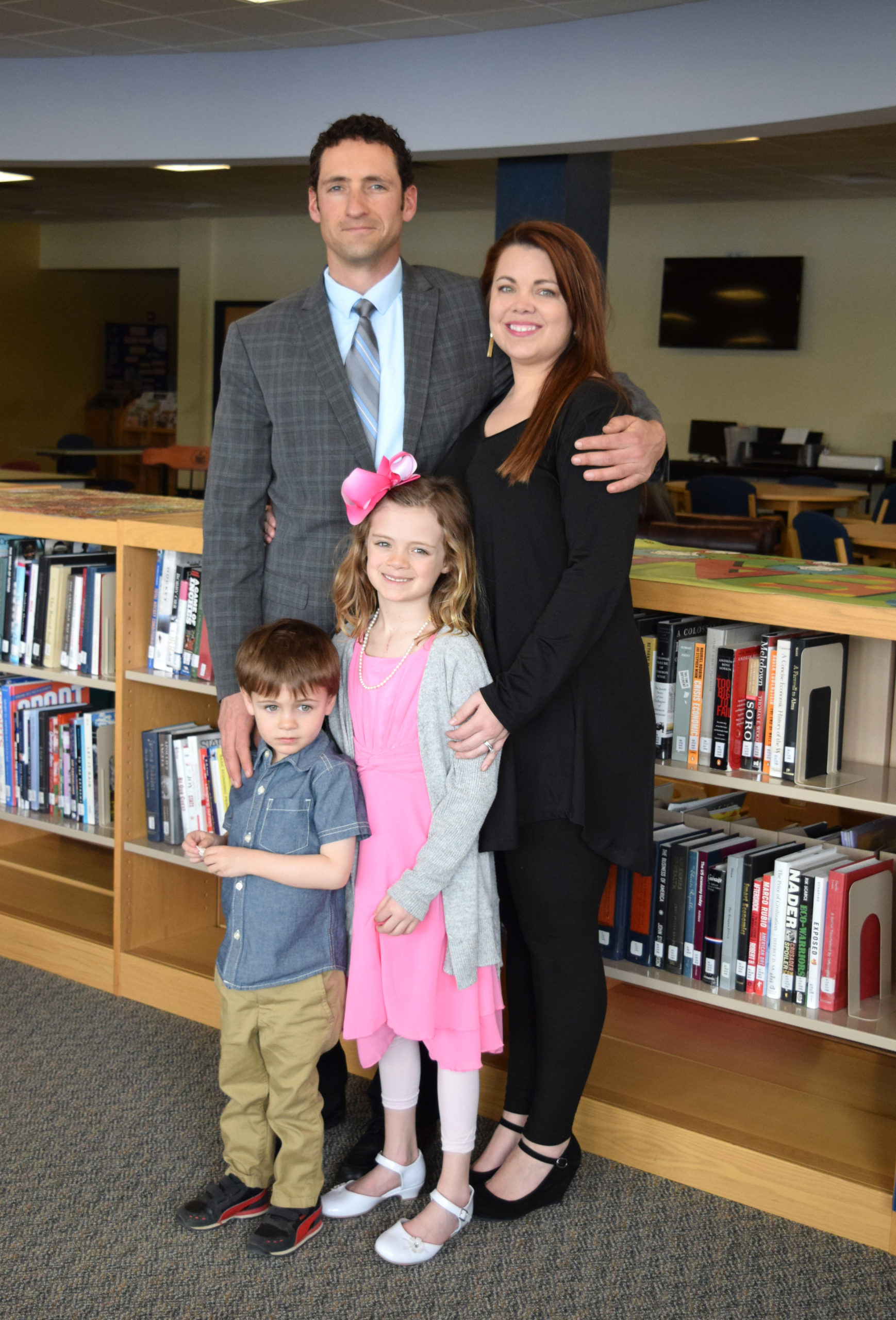 Marcel and Christy Chalou with their children, Evangeline and Alexander, pictured in the NMCC library after the live-streamed ceremony. Marcel received NMCC’s 2020 Student of the Year award.

Aroostook — In late April, the Maine Community College System recognized this year’s Student of the Year award recipients on a statewide Zoom call with an audience of educators, legislators, and Maine’s business leaders. In years past, winners were announced at a luncheon near Augusta; however, due to the pandemic, this year’s ceremony took place entirely online.

NMCC was the first of seven colleges to present their award winner, and Dr. William Egeler, dean of students, introduced Marcel Chalou, the 2020 NMCC Student of the year recipient and water treatment technology graduate. Dr. Egeler described Marcel’s journey, growing up in the small town of Easton and leaving Northern Maine after high school to join the Marine Corps. After tours of duty in both Afghanistan and Iraq, Marcel worked in law enforcement in Nashville, Tennessee, for 10 years. During this time, Marcel met his wife, Christy, and they had two children, Evangeline and Alexander.

Just over two years ago, the Chalou family decided to return to the town where Marcel grew up, Easton, and raise their children with a renewed focus on family values. Wanting to preserve the natural environment for his children and build a promising career, Marcel decided to enroll in NMCC’s new water treatment technology program.

Marcel committed himself to his studies, became a lab assistant, and contributed on campus through encouragement, helping other students, and being a spokesperson for the new program when necessary.

Marcel earned a cumulative 3.9 gpa, and graduated with honors with an associate’s degree. An internship during his senior year led to full-time employment and Marcel now applies his knowledge of water treatment to protect the waterways of Aroostook County and beyond.

“He would not let the program or the college down,” said Dr. Egeler in his introduction. Dr. Egeler continued to quote a colleague who nominated Marcel, “Marcel is truly a great NMCC success story. He came here to start anew, helped to build not only his own future potential, but also that of his chosen program. And leaves us as recognized in his industry, having been hired before his graduation.”

After the introduction, Marcel spoke to the digital audience and thanked the many people that helped him along the way: his wife, veterans, friends and family, and NMCC faculty and staff; he dedicated his achievement to his children. To ensure strong internet connection during the broadcast, Marcel brought his family to NMCC campus the day of the event. His wife and children watched the live stream on a television in the library.

Due to this recognition, Marcel represented the graduating class and delivered a speech during the 2020 virtual commencement on May 2nd, which is still available on nmcc.edu and the college’s Facebook page.