An NMCC student in the paramedicine program has been awarded a Canadian provincial scholarship for his work on the psychological stressors faced by emergency professionals.

Francois Gauthier-Galipeau currently works part time for Ambulance New Brunswick and is one of a handful of Canadian students taking the NMCC paramedicine program.  The 27 year old lives and works in Grand Falls and is studying to upgrade from an EMT to a paramedic in order to work in an urban area or inflight.

In December, Gauthier-Galipeau learned of the Tema Conter Memorial Trust Scholarship Awards which are presented to EMS or military students in Canada for essays that discuss PTSD, acute and cumulative psychological stressors and the effects that these stressors may have on their personal and professional lives.  By January, he was informed that he was chosen as one of only four recipients across Canada to receive the $2,500 scholarship and on February 13th, Gauthier-Galipeau attended a conference and gala in Toronto to receive his award.

“Tema is very helpful in bringing about awareness regarding the psychological injury that can occur due prolonged exposure to stressful events,” says Gauthier-Galipeau.  “They are also instrumental in helping to point out where services can be found.  The most important thing for emergency workers is to recognize the symptoms of stress, to treat it seriously, to seek help and to understand they are not alone.” 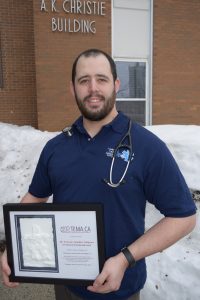 Originally from Gatineau, Quebec, Gauthier-Galipeau has worked as an EMT for five years in various locations in Canada.  He says he chose NMCC because it makes financial sense—a savings of about $10,000 in contrast to studying the comparable course in Canada.  Once through the NMCC program, he will take an equivalency exam to gain licensure in Canada.

Gauthier-Galipeau hopes those in the emergency industry will not let the stigma of psychological injury prevent them from seeking assistance.  He says TEMA is just one of several organizations that offers online information on the topic and encouragement for getting help.

Recognizing that early education is essential, each year scholarships are made available to all Canadian emergency services and military students (including EMS, Fire, Police, and Emergency Communications students). Since the TEMA fund was established, more than a quarter of a million dollars has been awarded in scholarships.