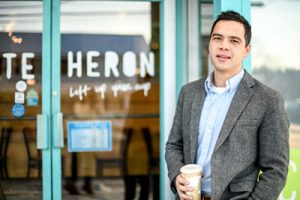 Jaed Coffin is the author of A Chant to Soothe Wild Elephants (2008) which chronicles the summer he spent as a Buddhist monk in his mother’s village in central Thailand. His forthcoming book, Roughhouse Friday is about the year he won the middleweight title of a barroom boxing show in Juneau, Alaska. Coffin has lectured widely at over twenty colleges and universities, where he speaks on topics of multiculturalism, masculinity, and the environment. He served as a lecturer at Bowdoin College and as the artist in residence at the Telling Room, a nonprofit storytelling foundation that empowers refugee communities. Coffin is an assistant professor of creative writing (nonfiction/fiction) in the English department and M.F.A. program at UNH.