A Liberal Studies student from Limestone got the surprise of his life just before the fall semester started at Northern Maine Community College.  Jason Sprague, a second-year student, was chosen in a raffle to win free tuition for a year. Better still, Jason’s mother, Linda Harvey purchased the tickets and kept it a secret! 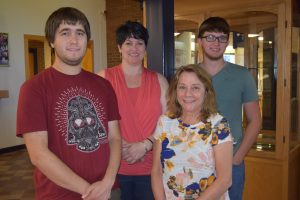 Jason Sprague (left) won the Free-Tuition Raffle at Northern Maine Community College. Tara Henderson (second left) is President of the Alumni & Friends Organization. The Chair of the Trade and Technical Department, Pam Buck, purchased the second-place winning ticket for Leigh Buck. He won
a $250 gift certificate to the NMCC bookstore.

The drawing for The Alumni & Friends Organization Free-Tuition raffle took place one week before the first day of classes.

“She called me and said ‘you’re not going to believe this, but you’ve won free tuition at NMCC this year!”’ explained Jason. “I asked if she was kidding because sometimes we like to pull each other’s leg, but she sounded serious!”

After the win, Linda teased Jason several times that he owes her money for the cost of the tickets she bought! (Money well spent J.) Jason hopes to pursue a bachelor’s degree after graduating from NM and he’s helping to pay for his education.  He says this gift will motivate him to work even harder in his studies.  Both he and his mother are very grateful for the prize worth more than $2000.

The proceeds from the sale of the tickets go to the Alumni & Friends Organization, which pays for half of the tuition cost—the College pays for the other half.  The winner is entitled to 12 free credits per semester.

The second place winner in the raffle was Auto Collision Repair student Leigh Buck of Presque Isle.  He won a $250 gift certificate to the NMCC bookstore.  His prize was also a surprise because Trade & Technical Occupations Chair, Pam Buck, purchased the ticket. Pam makes a habit of buying raffle tickets for her students, and she’s extremely lucky. Just two years ago her ticket was chosen as the tuition-free winner!