Two Northern Maine Community College students have been named to the All-Maine Academic Team for two-year colleges.  Jenny Morneault of Fort Kent and David Craw of Washburn were honored during a ceremony at the Senator Inn in Augusta on Wednesday, March 22 along with two students from the other six community college campuses.  Each student received a $500 scholarship, plaque and medallion.

Morneault is enrolled in NMCC’s Nursing program. She is a Dean’s List student who is a member of the Student Nurses’ Association and has been active in clothing and food drives for Catholic Charities, Maine.  Morneault, a mother of one who also works two jobs, plans to continue her education to earn a bachelor’s and master’s degree in nursing.  Her goal is to be a Nurse Practitioner focusing on wound care.

Craw will be graduating this spring with degrees in Business Administration and Liberal Studies.  He plans to go on to a four-year college to major in Secondary Special Education with the goal of becoming a teacher.  Craw and his wife are raising their eight-year-old grandson and caring for his elderly mother-in-law. He is currently maintaining a 3.96 grade point average while working in NMCC’s Academic Success Center, serving as Vice President of Phi Theta Kappa, and serving as a part-time minister. 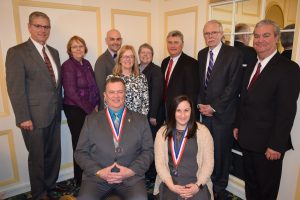 “David and Jenny represent the best of Northern Maine Community College: their commitment and work ethic are outstanding,” said Dean of Students, William Egeler.  “The College is very proud of their leadership and example.  They are most deserving of this prestigious honor.  This award means they are among the most accomplished of the more than 17,000 students who are currently enrolled in Maine’s seven community colleges.”

The All-Maine Academic Team is a program of Phi Theta Kappa, an international honor society for two-year colleges.  Students are nominated and selected for the team by their college based on outstanding academic achievement, leadership and service.  The Maine Community College System Board of Trustees hosted the presentation ceremony in Augusta.