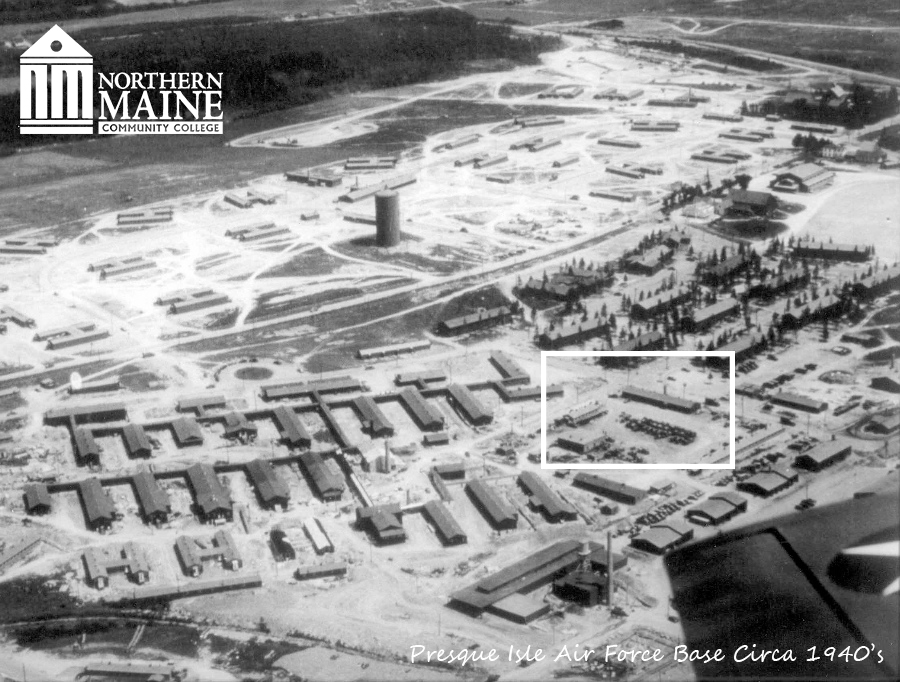 Photograph taken from an aircraft overlooking the Presque Isle Air Force Base circa 1940s, as seen facing southeast toward downtown Presque Isle. This military base formerly resided on the property where NMCC now stands. The two buildings within the white box (top two) are the two being removed.

Presque Isle —  Two of the last remaining buildings from the historic Presque Isle Air Base are being dismantled this summer on Northern Maine Community College campus. The buildings, located in the northwest portion of campus, have been used as a student senate lounge, bookstore, and most recently, a maintenance building.

Most likely constructed during World War I1, after the Presque Isle Airport and surrounding property was appropriated by the federal government in 1941, the buildings are each one-story structures resting perpendicular to each other. Their purpose prior to the existence of the College is unknown, and the College does not have original building records.

NMCC campus occupies a property with a rich history, as the Presque Isle Air Base offered the location geographically closest to the European theater during World War II. Northern Maine soil is the first soil soldiers would touch if returning by aircraft from Europe. After these two buildings are removed, the only remaining original structure belonging to the College will be the church in the southwest corner, which is occupied by Homeless Services of Aroostook.

A portion of NMCC’s Christie Complex serves as a museum dedicated to the campus’s military past, highlighting the history through photographs of WWII Army soldiers, fighter planes, nurses, and the SNARK missile, which was designed during the Cold War to carry a warhead up to 6,300 miles and pose a nuclear threat and deterrent to the Soviet Union. Additionally, the current Presque Isle International Airport houses the interactive Presque Isle Air Museum, a non-profit dedicated to raising awareness around the region’s rich history.

The buildings are currently not being used by the College, and each would require extensive repairs in order to be safe for use. After they are removed, the College will convert the underlying property to a green space with grass and landscaping.

Since NMCC’s founding in 1961, grants and fundraising have allowed the property to evolve from a military base comprising mostly of barracks and administrative buildings, to a dynamic learning environment offering some of the finest facilities in the state. This summer, the Reed Dining Commons is undergoing a complete renovation to provide new kitchen and dining services for students, as well as a community kitchen available to educate community members how to prepare healthy meals on a budget.

“While we’re always embracing change and looking to improve campus for our students, we also appreciate the distinct history of our property, and the role it has played in the fabric of our nation’s history. We hope anyone interested in learning more will stop by one day to explore our museum, or to visit the Presque Isle Air Museum just next door at the airport,” said Dr. Dottie Martin, Dean of Development and College Relations at NMCC.

To learn more about NMCC, or to explore any of the 30+ programs offered on campus, please visit nmcc.edu or give our admissions team a call.