“I have been to many trainings and conferences throughout the years, but this one was certainly among the best,” said Northern Maine Community College Automotive Collision Repair Instructor Bob Collins. He was speaking about the 3M Corporation training he attended over the summer.

The training showcased 3M products and techniques used for both interior and exterior vehicle refinement.

“I heard about the training last winter and applied, thinking that it would be a worthwhile opportunity.” said Collins, “When they notified me in May, I was surprised, but it was only after I arrived in Minnesota that I realized what a privilege it was.” 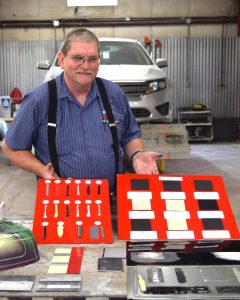 Automotive Collision Repair Instructor Bob Collins displays 3M product samples and textures used for seam sealer repair. Collins attended a conference in Minnesota this summer where he had an opportunity to learn proper techniques for applying them.

Out of a very competitive nationwide application process, only 12 participants were selected for each of the 2 one-week sessions, and the attendees were all instructors of the trade.

“They presented us with a lot of valuable information in a very short period of time, but it was well worth it,” remarked Collins.

One of the highlights of the four-day training was a car painting competition. Each of the participants were given a small model of a racecar and two hours to paint it as they wished. As an advantage, they were able to use new paint guns with disposable spray heads with different tip sizes and paint colors. This allowed the process to go much faster than traditional paint guns would.

As Collins began working on his model car, he had an idea to design his car in a similar spirit as Chip Foose, the highly acclaimed automobile designer, by incorporating the 3M logo on the hood. By utilizing a new 3M transparent tape product, Collins created a refined stencil mask of the 3M logo before he began painting the rest of his car. He was the only student to take on that challenge.

“The instructors were skeptical at first, but my experience allowed me the patience to see this through,” said Collins. “In addition to automotive work, I have also done some work as a sign painter which definitely came in handy.”

When it came time to announce the top placers, Collins unanimously won first place. Along with bragging rights, he was one of four trainees presented with a new paint gun. 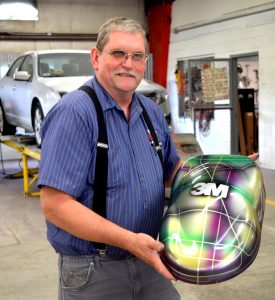 Bob Collins won first place in a painting competition at a 3M training he attended this summer. Collins has been the Automotive Collision Repair instructor at Northern Maine Community College for almost 29 years.

“The entire experience was awesome, but winning that top finish for painting was icing on the cake,” said Collins.

Collins has been the Automotive Collision Repair instructor at Northern Maine Community College for almost 29 years. He has continued to bring innovative solutions to his classes and has been a champion for providing his students with current solutions for repairing vehicles. Much of what he learned at the training will directly impact them.

“The knowledge I gained will be invaluable to the instruction that I provide at NMCC. I was able to see and use materials that have not been released yet and learn different techniques for refinishing,” said Collins. “As an auto body repairman, you always want the work that you do to appear as if no one has touched the vehicle. These solutions aid in that process. Having the opportunity to share this information with my students will be invaluable.”