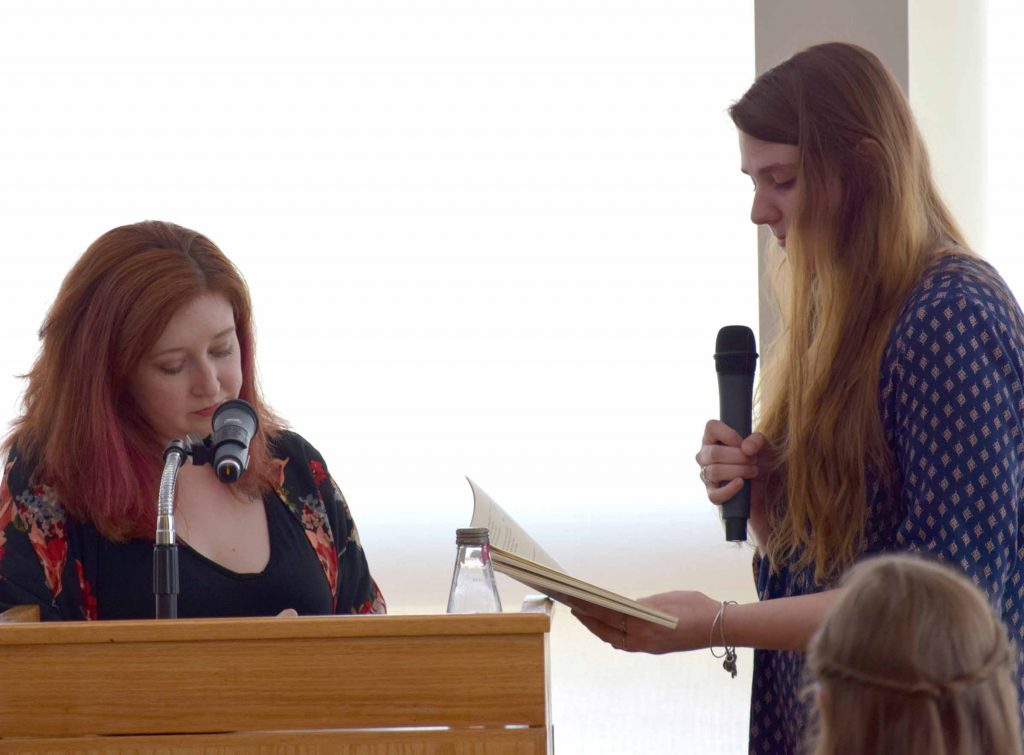 Aimee Baker reads a poem, accompanied by NMCC student, Isabella Weiland, from her book Doe as the last guest in the College’s Creative Writers’s Series in April. Doe is a collection of poems featuring missing women.

Creative Writing students participated in the events by reading from their original works, which included various pieces of poetry, fiction and non-fiction. The students’ works touched on subjects such as relationships, religion, and interests such as car racing. Each session was highlighted by a guest writer who shared excerpts from their books and took time to answer questions and offer insight. The sessions concluded with book signings.

The guest writers for this year were Joan Dempsey, Jaed Coffin, and Aimee Baker.

Joan Dempsey is the author of This is How it Begins (2017), a novel that has been named a finalist for both 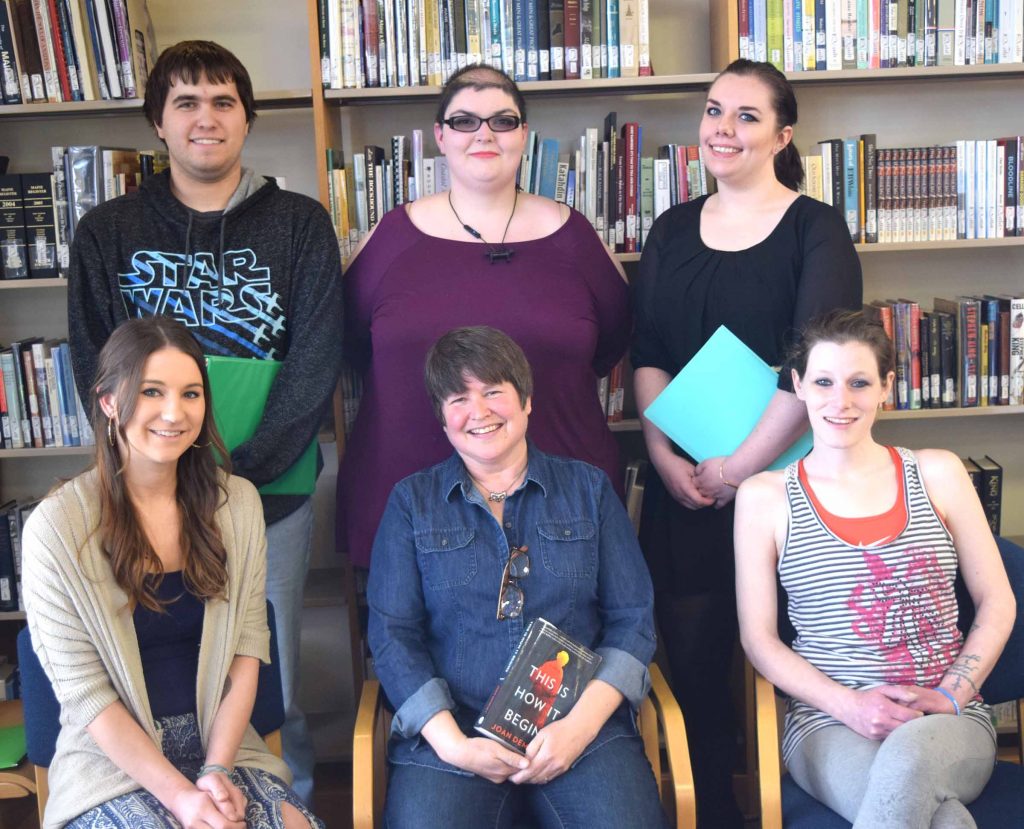 the Sarton Women’s Book Award and the Lambda Literary Award. In 2017, she was named as one of “5 more over 50” writers to watch by Poets & Writer’s Magazine.  Her writing has been published in The Adirondack Review, Alligator Juniper, Obsidian: Literature of the African Diaspora and Plenitude Magazine, and aired on National Public Radio. She resides in New Gloucester, Maine, where she helps serious creative writers master the craft of revision through online courses and free resources.

Jaed Coffin is the author of A Chant to Soothe Wild Elephants (2008) which chronicles the summer he spent as a Buddhist monk in his mother’s village in central Thailand. In contrast, his forthcoming book, Roughhouse Friday is about the year he won the middleweight title of a barroom boxing show in Juneau, Alaska. Coffin has lectured widely at over twenty colleges and universities, where he speaks on topics of multiculturalism, masculinity, and the environment. He served as a lecturer at Bowdoin College and as the artist in residence at the Telling Room, a nonprofit storytelling foundation that empowers refugee communities. Coffin is an assistant professor of creative writing (nonfiction/fiction) in the English department and M.F.A. program at UNH.

Aimée Baker is the author of Doe (2018), a collection of poetry about missing women that was selected by Allison Joseph as the 2016 Akron Prize winner at University of Akron Press. Baker’s fiction, poetry, and creative nonfiction have appeared in journals such as The Southern Review, Gulf Coast, The Massachusetts Review, and Guernica. In 2014, she received the Zoland Poetry Fellowship at the Vermont Studio Center.  Currently, she is a lecturer for SUNY Plattsburgh’s Professional Writing Certificate Program and she also serves as fiction editor for the Saranac Review.

In addition to the readings, each author visited classrooms to have focused time with the students. This is the eleventh consecutive year that NMCC has hosted these events. 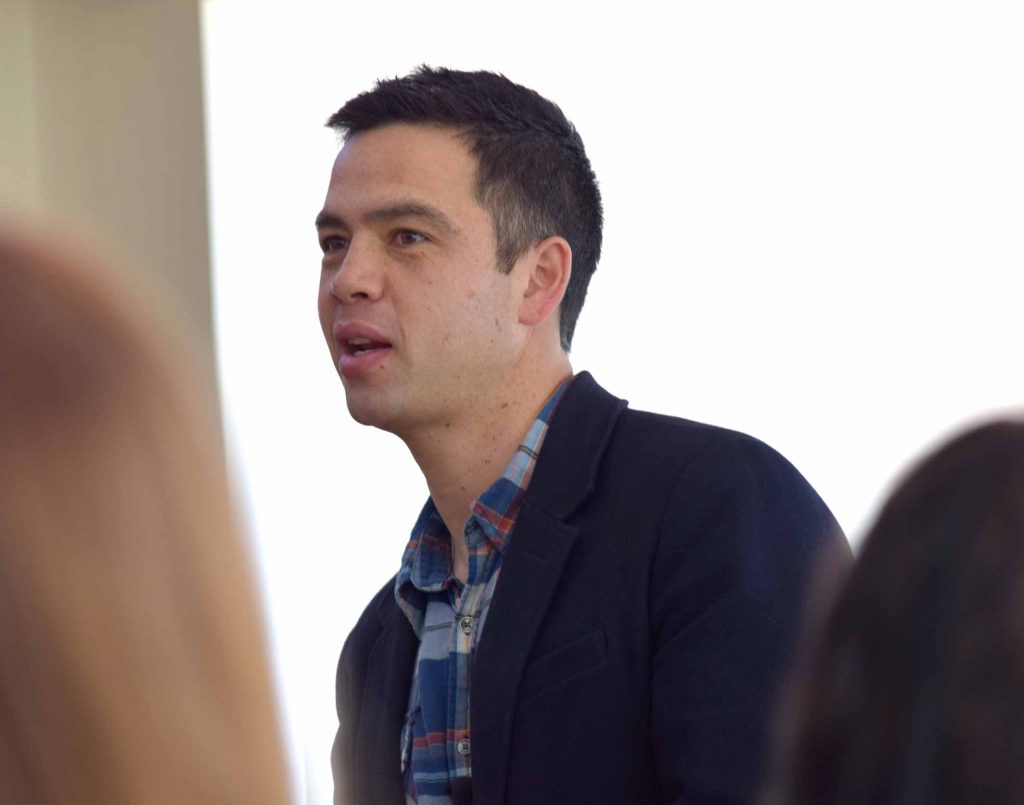 Jaed Coffin speaks to a full audience at NMCC’s E. Perrin Edmunds Library in April. Coffin is a published author and accomplished lecturer. He was one of three guest authors of NMCC’s annual Creative Writers’ Reading Series and shared an excerpt from his novel, A Chant to Soothe Wild Elephants (2008).