It’s the adrenaline rush that Northern Maine Community College Emergency Medical Services (EMS) student Angela LaPlante experiences when she is dispatched to a scene that motivates her to do her job. “It’s like detective work. You need to investigate and figure things out”, referring to the amount of problem solving and critical thinking required in EMS. “I like to challenge myself.”

Angela’s husband inspired her to pursue a career in EMS. He completed his paramedic certificate at NMCC, which sparked her interest in the EMS field. According to Angela, he spoke very highly of the EMS program and of an instructor, Leah Mitchell. “Leah is very knowledgeable and has a lot of experience. She is a good teacher.”

Angela reports having a positive experience in the EMS program. Being a small class, Angela states that everyone works together and that there is a comradery among everyone. “We have learned to depend on each other.” Although there are two females and five males currently in the program, Angela states that this is not an issue. “We joke around and everyone gets along.”

The biggest challenge for Angela has been finding a balance between work, home, and school. In addition to attending her classes, Angela works two part-time jobs and has three children. Angela has worked as a certified nurse assistant (CNA) for six years and currently works in the emergency department at Cary Medical Center. For the past year, Angela has worked for the Van Buren Ambulance Service.

Angela’s husband works full-time at the Caribou Fire and Ambulance and he is currently attending NMCC to complete his Associate in Applied Science degree in EMS. Angela reports that it has been helpful working in the same field as her husband, as they have been able to have conversations about the profession and learn from each other.

There are several aspects of EMS that Angela enjoys, including the variety that comes with working in the field. “It’s something new every day.” Angela likes receiving emergency calls and arriving at the scene, stabilizing the patient, and using her skills. She also enjoys transporting patients as it gives her the opportunity to get to know them.

In order to be successful in the EMS field, Angela notes the importance of being physically fit, as EMS includes strenuous tasks such as lifting patients and climbing stairs. “Physical endurance is needed.” Angela is currently working on improving her upper body strength by exercising.

According to Angela, women have positive traits that they can bring to the field, including compassion and their innate ability to take care of people. “Children respond better to females. Pre-teens and teenage females are not always comfortable around men. Having a female there is beneficial.”

In May of 2017, Angela will be graduating with her Associate in Applied Science degree in EMS. Angela is currently undecided about what she wants to do after graduation, however, she would like to stay in the area to be close to her family.

Angela offers advice for anyone considering a career in EMS. “If you are a highly structured person, EMS may not be for you. EMS is ever-changing. You have to be prepared for the unexpected and you have to be very flexible.” Due to the ongoing changes within the medical field, Angela mentions the importance of lifelong learning to stay up-to-date on certain protocols and procedures.

Angela offers tips for student success. “Stay current with the readings and be interactive in class. Ask questions. There is no such thing as a bad question. Instructors are available outside of class if needed.” Angela also discusses the importance of listening in class and utilizing the Academic Success Center on campus if needed.

Through her current work experiences and the education that she is receiving at NMCC, Angela is gaining the knowledge and skills necessary to work in EMS. Angela’s strong work ethic, caring nature and desire to help others will make her successful in the EMS field. “It’s nice to feel like you made a difference in someone’s life.” 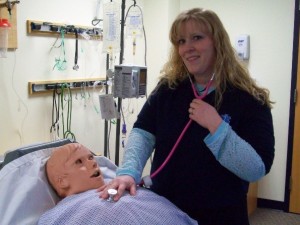